The Return of Officer Friendly and a Fourth Amendment Double Header 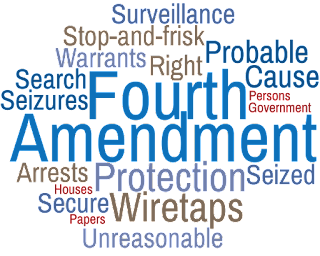 On January 9th the Supreme Court heard arguments in two Fourth Amendment cases: Byrd v. United States and Collins v. Virginia.  That must mean it's time to have another visit from our pal Officer Friendly, our guide to all things Fourth Amendment.  These might not seem like "big" cases at first blush, but I think you will see that they could have a major effect on search and seizure law.  As a bonus, I'll introduce you to a new legal term.  Plus a cert petition to follow.

You are driving a rental car near Harrisburg, PA. You get stopped by Officer Friendly for violating a Pennsylvania driving law.  But there are some problems for you. First, you are not listed on the car rental agreement as a driver.  And you have a criminal record including drugs, weapons, and assault.  Officer Friendly and another officer ask for your permission to search the car. (They say you gave it; you say they told you it doesn't matter if you give it because you are not a listed driver). Officer Friendly and the other officer do not have a warrant or even probable cause. They search the vehicle anyway and find heroin and body armor.

At trial, you move to suppress (that is, keep out of evidence) the heroin and body armor, arguing that the search of the car was unlawful.  The trial court disagrees, holding that you have no expectation of privacy in the rental car because your name was not on the rental agreement.  (The fact that your boyfriend/girlfriend who is father/mother to your children was the renter does not matter).  You appeal to the Third Circuit (the federal appeals court that handles appeals from Pennsylvania) and they agree with the trial court: the stop itself was lawful and you have no expectation of privacy in the rental car because you are not listed on the agreement.  Note that the Third Circuit did concede that there is a split in the federal circuits over just this issue. (The split is between the Third, Fourth, Fifth and Tenth Circuits (no expectation of privacy) and the Eighth and Ninth Circuits (you have an expectation of privacy if you have the renter's permission, which Byrd had). And the Sixth Circuit uses a "totality of the circumstances" test).

So don't judge Officer Friendly too harshly: even if he was a Fourth Amendment scholar, there are three positions in play as to whether the non-listed driver has any expectation of privacy, thus requiring probable cause and a warrant. This is the issue (yes, just one) before the Supreme Court, which granted cert to resolve this conflict which as Byrd's counsel said is "entrenched".  The hope is the Supreme Court will settle on one, with a clear majority opinion.

This case is simple on the facts but involves the automobile exception to the Fourth Amendment (which was also in play in a different way in Byrd) and private property, namely the curtilage to a home. More about curtilage (your new legal term) in a moment.

The facts: Officer Friendly is looking for a motorcycle that was involved in criminal activity.  Officer Friendly goes to the house where the motorcycle is expected to be (they got the plates from a police car camera and thus the registered owner). He sees what looks to be a motorcycle under a tarp in the driveway,  He walks up the driveway, removes the tarp and it is, in fact, the bike he was looking for.  He takes the VIN and the license number, replaces the tarp, and leaves.

Collins sought to suppress the evidence, arguing that the search was illegal because even with the automobile exception, the officer was without a warrant, entered private property, and searched a vehicle parked a few feet away from the house. The trial court and the Supreme Court of Virginia disagreed, holding that Officer Friendly, who had probable cause, could both walk up the driveway to the tarped vehicle and could remove the tarp from the vehicle because the automobile exception, which allows the police to search a vehicle without a warrant provided there is probable cause, applied for both the walk up the driveway and the tarp removal.

The Supreme Court granted cert to decide the issue of whether the Fourth Amendment's automobile exception permits a police officer, uninvited and without a warrant, to enter private property, approach a house and search a vehicle parked a few feet from the house.  Put another way, this case involves the intersection of the curtilage doctrine and automobile searches. What is a curtilage, and why does it matter?

The curtilage (from the Old French cortillage through Middle English courtelage, "court, yard or garden") of a house or dwelling is the land surrounding it, including any closely associated buildings but not including any associated "open fields" beyond.  It is an area that the homeowner can have a reasonable expectation of privacy, an area that harbors the "intimate activity associated with the 'sanctity of a man's [sic] home and the privacies of life'" Oliver v. United States, 466 U.S. 170, 180 (1984) (quoting Boyd v. United States, 116 U.S. 616, 630 (1886)).  Recently, in a 5-4 decision written by Justice Scalia, that the curtilage (in that case the front porch) may not be used by a police dog to sniff for marijuana.  Florida v. Jardines, 133 S. Ct. 1409 (2013).

Is the driveway in the curtilage or beyond, in what would be called for Fourth Amendment purposes, "open fields"?  If open fields (another exception to the Fourth Amendment), then there is no Fourth Amendment search in approaching the bike.  If the driveway is in the curtilage it's a different case, like Jardines. Let's say Officer Friendly can go up to the bike.  Can he pull the tarp off?  Well, there is an exception to the automobile exception that goes like this: the automobile exception allows for warrantless searches of cars but not for warrantless searches of containers. The tarp is a "container" or "lid" for the vehicle (or so you could argue) or, put another way, the automobile exception doesn't free you from the warrant requirement just because the thing under the tarp turns out to be a vehicle. For a short and clear piece on Collins by Orin Kerr, probably the leading scholar on the Fourth Amendment, see http://reason.com/volokh/2018/01/03/a-few-thoughts-on-collins-v-virginia.

I'll be following both cases.  I can imagine the oral arguments will be quite interesting.

What it means: Whether or not you might have to pay sales taxes on internet purchases even if the company has no physical presence in the state.