Showing posts from September, 2017
Show all

The Big Seven (Plus One) Supreme Court Cases: A Change In Lineup

September 25, 2017
The "Travel Ban" cases ( Trump v. IRAP/Trump v. Hawai'i) were scheduled to be argued in the Supreme Court on October 10; an entire hour had been allotted for argument. That all changed today when the Court took the cases off of the argument calendar until further order of the Court and asked the parties to address (1) whether the proclamation issued by the Trump administration yesterday rendered the cases moot; and (2) whether the expiration (on October 24) of parts of the March 6, 2017, order that barred admission of refugees rendered Trump v. Hawai'i moot. (Remember that "moot" is the legal term for meaning that there is no longer a dispute that the Court can settle). Briefs are limited to 10 pages for each issue and have to be filed simultaneously on October 5. The document that the Trump administration issued yesterday was a proclamation, not an Executive Order as were the two previous travel bans.  What difference, if any, that makes is unclear.  Thre
Post a Comment
Read more

The Big Seven (Plus One) Supreme Court Cases: Part 1

September 23, 2017
As I mentioned in my last post, there are seven important cases that have already been granted by the U. S. Supreme Court ("SCOTUS" for short) that will be argued during this term (October 2017-June 2018).  To keep the blog entries short, I'll cover two cases with each post, tossing in an extra case (so eight in all), and I'll present them in the order that they will be argued. October 2 : Epic Systems Corp. v. Lewis; Ernst & Young LLP v. Morris; NLRB v. Murphy Oil USA (consolidated) These cases, consolidated for oral argument, may at first seem dry and technical, not the kind of cases that gets much play in the press. But they have the potential to change the relationship between employers and employees in a major way, specifically whether employees can bring collective (group) or class actions against their employers to enforce work-related legal claims. Many employers condition employment on the employee's agreement to resolve workplace disputes throu
Post a Comment
Read more

I'm Back, And So Is The Supreme Court 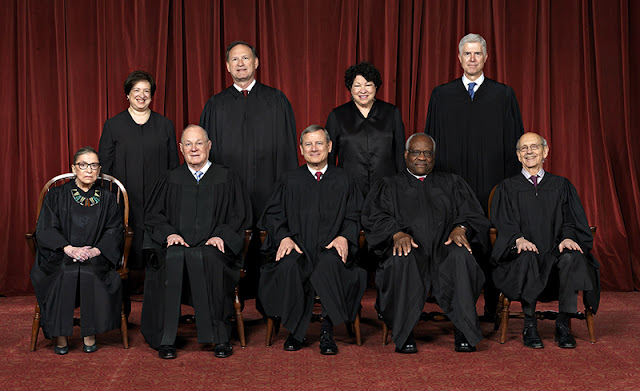 My apologies for being away so long.  While not intended, it did give me some time to tweak the blog a bit, and the soon-to-be-in session U. S. Supreme Court (it's only 18 days until October 2, the "first Monday in October" when the Court officially starts its term) couldn't be a better time to get back into what will be more frequent posting. There will also be occasional historical tidbits and suggestions for reading (including what I am reading). By any measure, this term will produce decisions that will have far-reaching consequences   (both society-wide and potentially over time) for issues such as the First Amendment free exercise and speech clauses, Fourth Amendment search and seizure, elections, immigration, and the federal/state relationship concerning who can regulate within the state's borders (I guarantee you will love that one).  It sounds like that would be plenty for a term that lasts until the end of June 2018, but in fact there are only 32 c
Post a Comment
Read more
More posts